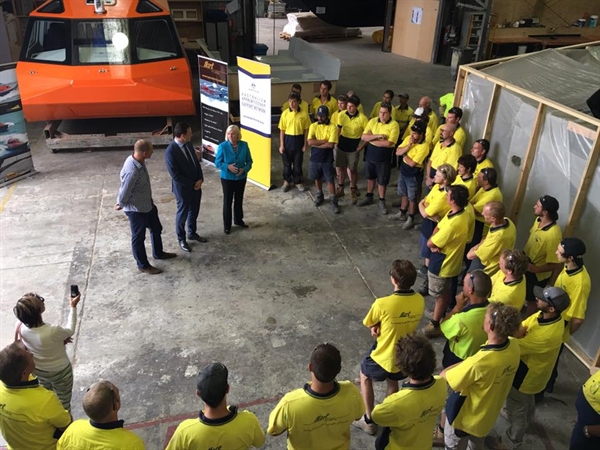 A new campaign has been launched aiming to put an extra 100 young people in the electorate of Dunkley on the path to a rewarding career in just 60 days and help boost the local skilled workforce in Melbourne’s southeast.

“The campaign will highlight the value of apprenticeships in providing a pathway to a great job
and career and at the same time help tackle unemployment,” Minister Andrews said.

“A similar campaign proved highly successful on the Gold Coast and I commend Chris Crewther for his work in getting this apprenticeship drive up and running in his local community.

“There are hundreds of apprenticeship options available to Australians and increasing the number of skilled workers in Dunkley will be good for the local economy,” Minister Andrews said.

Federal Member for Dunkley, Chris Crewther, is encouraging local employers to get on board.

“I am pleased to be able to launch this campaign along with Minister Andrews at Hart Marine in Mornington in my electorate of Dunkley. The team at Hart Marine are a great example of a local business who train apprentices in skills necessary for the workforce.

“Mal Hart, who is the owner, founder and Managing Director, along with General Manager Graeme Taylor, currently have 11 apprentices. Apprenticeships have been a core part of Hart Marine since the business was established in 1983 with 31 apprentices trained in total.

“Around 90 per cent of those who complete an apprenticeship transition straight into full time employment and on their way to a rewarding career.

“With such good prospects for an employment outcome I am hopeful that young people and employers embrace this campaign to raise apprentice numbers in the Melbourne southeast region,” Mr Crewther said.

“My message to people is simple: you don’t need to go to university to develop skills, get a job and build a fulfilling career. An Australian Apprenticeship can take you there.”