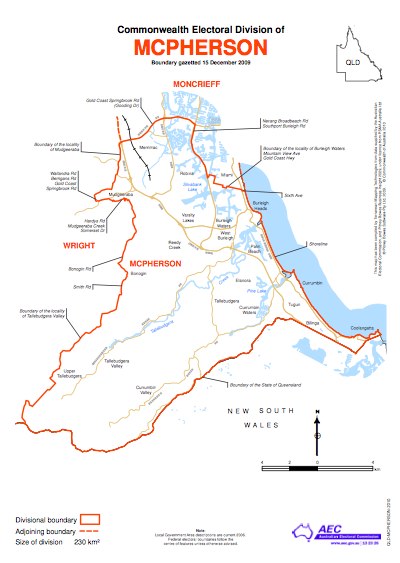 The Federal Division of McPherson was named after the McPherson Range which forms the south western boundary of the division.

About the McPherson Range

The McPherson range is part of the Great Dividing Range and runs in an easterly direction from near Stanthorpe to the coast north of Murwillumbah. Parts of the range are World Heritage declared areas and places like Lamington National Park, Border Ranges National Park and Mt Barney National Park are visually stunning.

There are some spectacular waterfalls on the McPherson Range, including the Teviot, Queen Mary and Browns Falls.

The McPherson range was named in 1828 by Allan Cunningham and Patrick Logan while searching for a route to the Darling Downs.

McPherson covers an area of approximately 230 sq km from Coolangatta in the south to Clear Island Waters and Merrimac in the north, and west to Mudgeeraba and Tallebudgera Valley. It takes in a major part of the Gold Coast tourist strip with the north-eastern electorate boundary on the coastline just north of Burleigh Heads.

Additionally, the electorate takes in the communities of Tugun, Currumbin, Bilinga, Kirra and Palm Beach, which are situated along the coast.

McPherson also includes the beautiful hinterland areas of Mudgeeraba, Bonogin, and the Tallebudgera and Currumbin Valleys.

Tourism is the backbone of the electorate, and like the rest of the Gold Coast many McPherson residents are employed in industries associated with tourism.  There are other industries too, including retail, surfboard manufacturing and light industry.

Further electoral details the Electorate of McPherson can be found at the AEC’s website on McPherson.