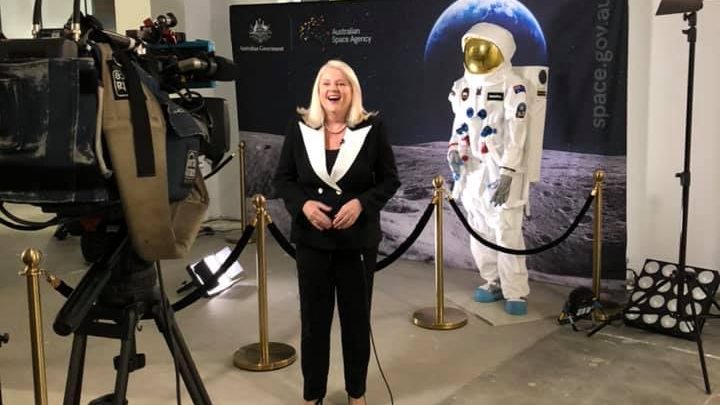 Allison Langdon: Well Australia will today reach for the stars with our new space agency to officially open its doors in Adelaide this morning.

Karl Stefanovic: The centre is set to be a major tourism draw card for the city and a hub for innovation and technology in the space race. Minister for Industry, Science and Technology Karen Andrews joins us now from Mission Control. She’s been dubbed this morning by the Today Show people our Space minister.

Karen Andrews: Good morning, and I love that title.

Karl Stefanovic: We’ll have a word to the PM about it. It is all systems go, though, isn’t it?

Karen Andrews: Look, it absolutely is. So it’s very exciting here in Adelaide. We’ve had a wonderful lead-up to today’s official opening. There’s so much excitement here in Adelaide about the space sector, but also that’s playing out right across Australia, whether it’s mums and dads, whether it’s young kids or whether it’s already our space technology professionals.

Allison Langdon: Australia sort of played a role in space explorations previously. We’ve launched satellites more than half a century ago. What role will this new facility play exactly?

Karen Andrews: Well, effectively, the space agency is the open door for other space agencies to collaborate and work with us here in Australia, but it’s the entry point for Australia into the space race quite seriously. So, since the Space Agency was established just over 18 months ago, they’ve been really focused on building recognition, opening doors, talking to the likes of NASA, the European Space Agency, the Italians, about what the opportunities might be for us to collaborate.

And what’s particularly interesting to those other agencies is that we have a very different model. We’re building relationships very strongly with Australian industry so that we can bring all of Australia and all Australians with us on this journey.

Karen Andrews: Well, we do already do some launch here in Australia, which is fantastic. I’m very keen to make sure that we are doing more launch, that we have a greater role in building satellites, that we’re also actively engaged with NASA on their Moon and on to Mars missions. So as a government, we announced $150 million to support Australian businesses. So this is money that’s going to Australian businesses here to be part of the program. It’s not money going to NASA …

Karl Stefanovic: …Because $41 million is probably not going to pay for the first fuel bill, to be honest.

Karen Andrews: Well, we’ve got a very different model. So the initial money was to establish the Space Agency – which has been done – opening of the new facilities. There’s more money coming through. We’re already over about $500 million that’s been injected into the sector. So the important thing, though, is that we’re bringing industry and our researchers with us. The high level engagement has, quite frankly, just been outstanding. And of course here at the agency, we’re establishing our Mission Control. We’re having a Space Discovery Centre so we can get people to come in and understand what we are doing in space, how GPS – which is part of space – is actually used to help them get around the city. I mean, many people probably will have used their GPS to get into the space agency and to visit other parts of Adelaide, South Australia and other parts of Australia.

Karl Stefanovic: Are you going to come up with a cool uniform like Trumpy did? And all that cool merch that comes with it too? I’m sure that’ll add to the bottom line, and look, we have to go. But may this whole thing live long and prosper. You know what I’m saying?

Allison Langdon: Give us your salute.

Karl Stefanovic: I love it. Thanks, Minister for Space. We appreciate your time today and good luck with it all.