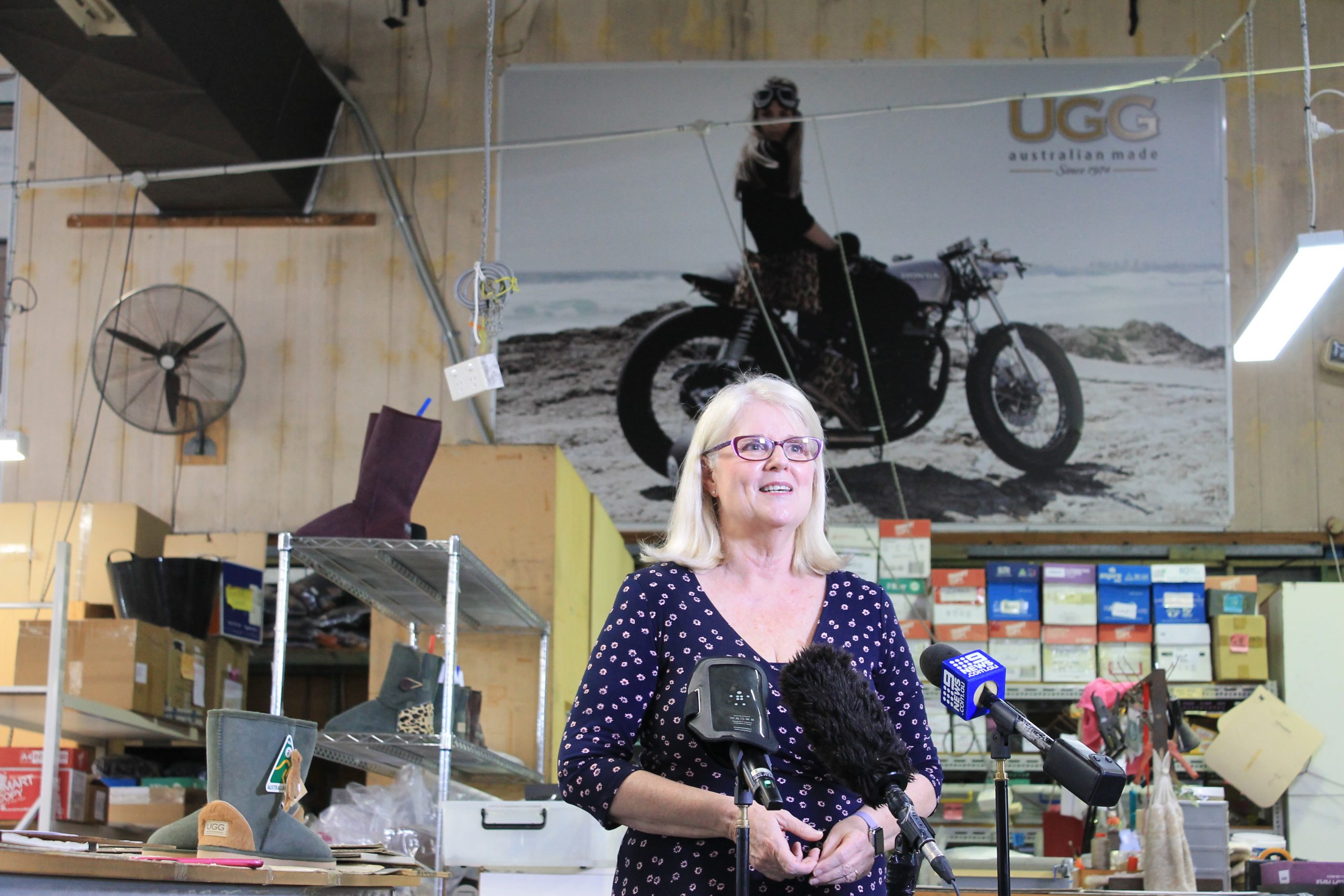 Karen Andrews: It’s an absolute pleasure to be here today at UGG Since 1974 and I’ll be introducing to you, Hannah, who’s one of the owners of the business here. Today is a really special day because Australian Made is kicking off another campaign. It will operate for about three months and it will continue to promote the Aussie made, Aussie grown logos. Now we know, particularly coming out of COVID-19 that Australians as well as many other people from around the world have been really interested in Australian made. So this is a real opportunity for our manufacturers, our Australian manufacturers to step up and meet the demand that is slowly but steadily being created here in Australia for Australian made goods.

So UGG Since 1974 has been here since 1974, they are an Australian manufacturer doing some absolutely fantastic work here. Not every UGG is the same so I’ll just introduce now Hannah, to talk about the business here at UGG Since 1974.

Hannah Watts: Thanks Karen. My name is Hannah Watts, I’m one of the owners here at UGG Since 1974. It’s great to have a bit of interest around our business today because most people don’t realise that about 96 per cent of the world’s ugg boots are actually made in China. So UGG in Australia is a generic word for a sheepskin boot which means that when you’re buying UGG boots it’s really important to look for the Australian Made label to support our local economy. Thank you.

Question: Karen, can I just ask, this campaign is it like a sort of like a marketing campaign, you’re just trying to put more light on our Australian made businesses and companies or like, what sort of I guess is involved in this campaign?

Karen Andrews: So this is a marketing campaign. It’s designed to make people aware of the very vast range of products that are Australian made. So if you go on to the Australian Made website you’ll be able to see a list of products, so it’s easy to search through. For Australian businesses, for Australian manufacturers, I would encourage you to have a look at the website. Look at how you can go about registering and then you can start using the very well-known Australian logo.

Question: Has there been more of an emphasis on Australian made especially during COVID where you know, things weren’t available that we might have say imported from China recently or elsewhere around the country. Do you think – sorry, around the world – do you think people are now looking more for what’s made here in Australia?

Question: And how, I mean our local businesses would obviously really need our support at this time…

Question: Yeah, just a border related question, can we just get a few border comments?

Karen Andrews: Look it’s very disappointing to find that the border between New South Wales and Queensland has not opened. I understand that there is movement throughout Queensland and that’s a positive. But right here on the Gold Coast, we need visitors from the southern states to be able to come up and fill up our accommodation here. So it’s really important that we get flights coming back into the border, that we have people able to drive across the border to stay at Coolangatta, Burleigh Heads, so many options that they have here on the southern part of South East Queensland, on the Gold Coast in particular. So we need to get those borders open. I understand it completely that people are really conscious of their health, but this is about us all managing the risk. And you’ve seen Australians being very eager to do the right thing with social distancing, with proper hand hygiene, so now’s the time to give us a break. Open those borders, let us all get back to work here in Queensland. Quite frankly the sooner the better.

Question: I just wanted to ask you about your business. I mean, obviously you were saying that so much of other UGG boots are made in China. How hard is that for you guys to differentiate what you do to what other brands do?

Hannah Watts: Yeah. So, it is a really difficult one because people just associate a great Australian innovation like UGG boots as being something that would be made here in Australia, but the reality is that it’s so much cheaper to obviously have things made offshore, that there are so many UGG boot companies bringing in other products which are still called UGG boots, but they don’t have the same origin here in Australia. So, it’s certainly been one of our biggest battles as an Australian manufacturer because there is a big price difference between what you can manufacture something for in China versus what it costs to make here in Australia.

And we pride ourselves on making really high-quality Australian made goods out of Australian sheepskin, obviously paying appropriate Australian wages. And Australian made products do come with a price tag. But what’s been amazing out of COVID-19 is that people are actually starting to really care about the origins of where the things they made are, and what that has meant is that even though people might be paying a little bit more for our product to start off with, they’re getting a product that’s employing their family and friends in our factory here.

We have over 40 employees in our business and when COVID-19 first hit, we were really worried that we would have to close our doors because we’re heavily reliant on international tourism. But it also means that those people are getting a product that’s made here in Australia. And I guess you’re accountable, you know where you can take your product back to if something goes wrong, and instead of rebuying a pair of $40 UGG boots, say, from Target every second year, you’re buying a product that’s going to last you a decade at least. So, there are really significant benefits in addition to supporting the Australian economy as to why you’d want to choose something that’s made here.

Question: Have you noticed that people are focusing now on Australian made since this whole COVID crisis?

Hannah Watts: Yeah, we definitely are. I mean, Australian made is such an important part of getting us through this global pandemic and the impact on our economy has obviously been exceptional. So, people are definitely wanting to get behind Australian manufacturers. And it’s also an issue of being able to actually get the product to you. So, a lot of people who are familiar with online shopping from overseas sites would have experienced a significant delay in freight coming into Australia. And that’s, I guess, another reason why people are choosing Australian made products, because they’re available locally and you can get them quicker than waiting for a freight flight from elsewhere.

Question: Can I just ask you, what has the impact been for you guys, this whole COVID situation?

Hannah Watts: Yeah. So, initially when the early reports of COVID-19 were circulating out of China we were really worried and that was back in January. February, obviously, the borders were closed to Chinese tourists and that coincided with Chinese New Year, which is, as a lot of people will know in the tourism industry, historically one of the best months of the year because there are a lot of Chinese travellers. So, our turnover basically dissipated overnight and we had really big outgoings. And we have significant leases in tourist rich areas, we have, as I mentioned, about 40 staff.

Unfortunately when coronavirus first hit, we had to actually stand down a lot of our employees here at the factory and we were down to two staff making UGG boots. That was in March when Australians hadn’t started to feel the cold yet and there were no international tourists. But look, the momentum shift has just been absolutely incredible and it’s meant that we’ve been able to rehire all of our staff. And we’re now in a position where we’re running back at what a peak season would ordinarily be for us. And that’s all thanks to Australians choosing Australian made. So, if anyone wants an example of how much of a difference you can make, that’s 40 people back at work now that wouldn’t have been if people were still choosing to buy products made offshore.

Question: Hannah, just quickly, I suppose, you mentioned you can get cheaper UGG boots made offshore, but there are also some premium brands made offshore which are still viewed as Australian made?

Hannah Watts: Yes, yeah. So, I mean, it can be such a confusing topic, UGG boots in Australia, because within Australia, as I mentioned, UGG’s a generic word for a sheepskin boot. But outside of Australia we have the problem where UGG’s actually trademarked by an American owned company who make all of their UGG boots, again, in China, Vietnam and the Philippines. So, there is such significant confusion. There are brands all around the place that are not made in Australia. And that problem for us means that as Australian UGG boot manufacturers we actually cannot expand outside of Australia because that American owned company has the trademark, albeit that it’s a great Aussie innovation, but they have no connection with Australia, no manufacturing presence here, no ownership here. So that’s another big issue for UGG boot manufacturers in Australia.