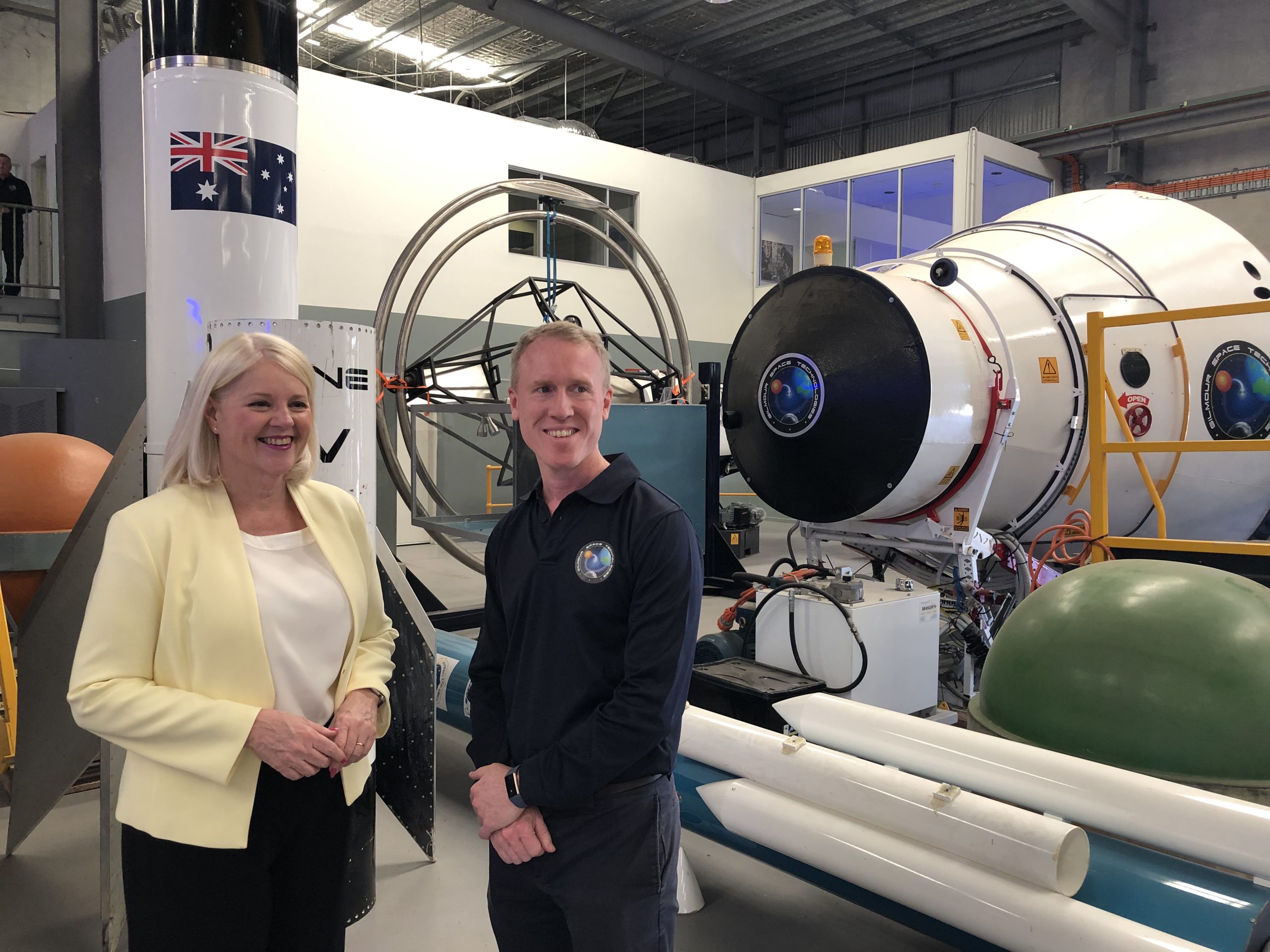 Karen Andrews: Well hello, and it’s an absolute pleasure to be back at Gilmour Technologies, our very own Gold Coast space business. Now, Scott Morrison, our Prime Minister, announced that Australia would be investing $150 million in the NASA program from the Moon to Mars. This is going to be a great opportunity for Australia, Australian businesses, and the people of Australia to take that next venture into space.

Now, as a Government we are very focused on creating opportunities and creating the jobs of the future. Space is an emerging industry sector for us. Currently it’s worth about $4 billion and employs 10,000 people. And we are committed to growing the space sector in Australia to $12 billion, and an additional 20,000 people by 2030. So the $150 million investment in the space program Moon to Mars will work very nicely to make sure that we have the opportunity to grow Australia’s space sector. So what we will be doing is working with businesses, for example Gilmour Technologies, to look at how we can be part of the program, how we can build on the technologies that we currently have, whether that be the work that Gilmour does, whether it be automation, robotics, where we’re currently world leading.

Australia is going to be part of the next mission that NASA makes into space. So it’s great news for us, great news for us here on the Gold Coast. And I now ask Adam to say a few words about what this means to Gilmour Technologies.

Adam Gilmour: Thanks Minister. So we are very, very happy, over the moon – sorry the pun. It’s fantastic that the Government’s listened to the industry. We’ve been working very hard to develop technology, and we’ve said that the goal to generate all the jobs and all the extra revenue is doable, but it needs investment and this is exactly what the Government’s done. They’ve stepped up to the plate, they’re putting the money across.

We will definitely love to participate in this and any funds we get will be directly into hiring more and more jobs in our company. We’re already growing very quickly; we’ve employed 45 people in the last three years. We’re super excited to work with NASA. We already have a space act agreement with NASA that covers a whole range of technologies that we can work together on. Very focused around the moon and Mars missions so we look forward to deepening our relationship with NASA, working with our space agency, and getting Australia to help get humanity back to the moon.

Question: Adam, the Minister mentioned building on technologies that you guys might be developing at the moment. What sort of technologies could we be looking at? – if you could put it in layman’s terms.

Adam Gilmour: Well, we’re working on propulsion systems. So you need rocket engines to get to the moon, to orbit around the moon, to land on the moon. So one of the things we could do is work on a propulsion system to take payloads from the moon orbit and land them on the moon’s surface. I mean, it’s early days. We heard the announcement literally 24 hours ago so we’ve been working very hard to see what we’ve got in the future, how we can bring that forward and develop it quicker.

But there’s a lot of different technologies we could use. Deploying satellites around the moon, orbit for communications. There isn’t a network around the moon, so if people want to land on the moon they’re going to need comms, GPS kind of systems as well, so that’s something we could participate in. But it’s early days for us yet. We’re going to work hard with NASA, with Australian Space Agency, and figure out exactly how we can do it.

Question: It’s quite costly though, is that money sufficient enough if you were to get a chunk of that?

Adam Gilmour: Yeah, I mean, Space 2.0 is all about doing things orders of magnitude cheaper. So we’re trying to build a rocket that’s probably 10 times cheaper than anyone’s ever done it before. And I think if the money is spent wisely, the Australian public would be really surprised how far it can go in developing really cool space technology. And that’s what the new space industry is about, doing things fantastic for cheap.

Question: In terms of investment, and I guess gaining momentum, is this a bit of a tipping point for Australian space tech?

Adam Gilmour: Massive tipping point. I think the money that went into the space agency initially was well known to be seed money but it wasn’t going to move the needle. I have publicly been very vocally saying we need at least $100 million. So I love to be surprised, 150 million’s even better. And this will definitely move the needle.

Question: It’s pretty incredible that a company based on the Gold Coast is, you know, going to be possibly helping this sort of grand venture.

Karen Andrews: Yes, absolutely. So we’re committed to growing jobs in the space sector. It is an emerging industry here in Australia. And when you think that the Australian Space Agency was only established about 14 or 15 months ago, we’re now at the point where we’re going to be part of the next mission to the moon and to Mars, and that’s an outstanding achievement. So overall the financial commitment from the Federal Government is over half a billion dollars, which is an extraordinary amount of money. It is targeted money. It’s very focused on Australian businesses. This won’t be money that’s injected to NASA. This will be money that’s used to grow Australian businesses. So the Morrison Government is about creating the right atmosphere here for investment.

Question: Minister, what are some of the flow-on effects of this? Because while this is, at the moment, I guess, investment in space, it can also encroach on our lives in the future.

Karen Andrews: Absolutely. Space touches us every single day. So for example, if you need to get somewhere and you’re using Google Maps, that’s information that’s coming back from space that you’re using. Some of the money that we have committed to the space sector will go to bringing the accuracy of the global positioning down to, in some cases, four to five centimetres, perhaps even less, which will make such a big difference – not only for everyone trying to find their way around using maps, but as we move to autonomous vehicles, it’s going to assist with the accuracy. I mean, quite frankly in some parts of Australia you’re looking at about a 10 metre accuracy, but if your autonomous vehicle is parking itself, you certainly want to be better than a 10 metre accuracy. So we need to bring that down as close as we possibly can.

And of course for our farmers, the Earth observation will give us information about the drought situation. We’ll be using information from satellites to track, for example, cows; where the herds are. And at some stage we won’t need electric fences anymore because we’ll be able to create virtual electric fences using technology, and all that comes from space.

I mean, who doesn’t love space?

Adam Gilmour: Last thing I want to say is I think you should now be considered the Minister for Space.

Karen Andrews: Oh, well, can you speak to the Prime Minister?