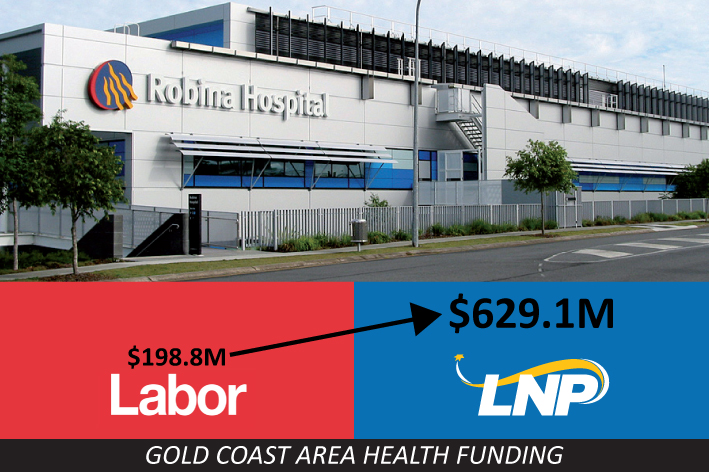 “The Labor party is making claims about funding being ripped out of the system – this is completely untrue.  It’s a blatant scare to win votes and does not reflect the actual figures,” Mrs Andrews said.

“And under the current Health Agreement funding is set to continue to increase every year to $6.7 billion in 5 years’ time.  It will be more than double what Labor spent when they were in Government.”

“Under the reported funding for The Gold Coast Local Health Network, which manages Robina and Gold Coast Hospitals, there will be a 229.8% increase since Labor was last in office.”

Mrs Andrews said the record levels of health funding were able to be delivered due to the Coalition’s strong management of the economy.

“Labor makes all sorts of promises on health – but they simply won’t be able to deliver if they don’t have the money.”

Mrs Andrews said the Liberal Nationals had also strengthened Medicare and the GP bulk billing rate in McPherson had increased to 88%.

“There have been no funding cuts to hospitals or schools at all – the figures show that funding has significantly increased.  Labor should stop their dishonest scare campaign and start explaining how they are going to pay for their promises.”