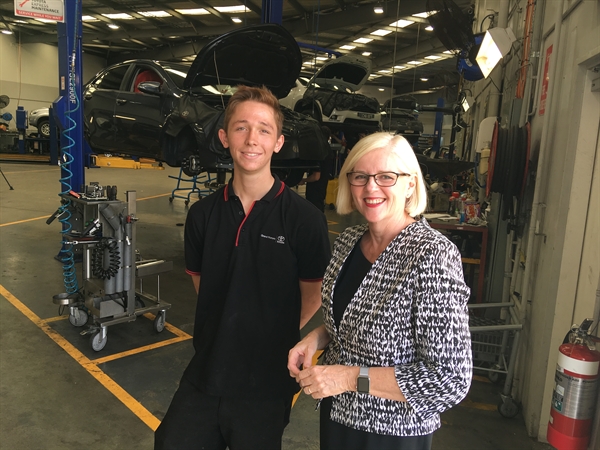 Latest figures from the #GC101 campaign show Gold Coast employers are getting right behind the effort to get young people into apprenticeships and on the way to a rewarding career.

Assistant Minister for Vocational Education and Skills, Karen Andrews, said local businesses should be congratulated for their support of BUSY at Work’s #GC101 campaign that’s giving young people the best Christmas present of all.

“75 young local people, including 32 school leavers, are now in jobs that provide them the training and skills they need to put them on the road to the jobs of the future,” Minister Andrews said.

“On top of that, 174 students have signed up to school-based apprenticeships that give them a great opportunity to go straight into paid skilled jobs when then finish school.”

Nearly 60 employers have signed up offering apprenticeship across a wide variety of occupations.

“We still have a couple of weeks to go in the campaign and it would be great to see us exceed our target,” Minister Andrews said.

“I congratulate Grand Motors at Southport for their support of the campaign and had the pleasure today of meeting Harry Bickle, one of the young apprentices they’ve taken on.

“Harry spoke about how much it has meant to him to get his first job and to be learning new skills that will make him a valuable employee into the future,” Minister Andrews said.

“Apprenticeships are a vital part of our vocational education and training system and evidence that university isn’t the only path to a rewarding job and career.”