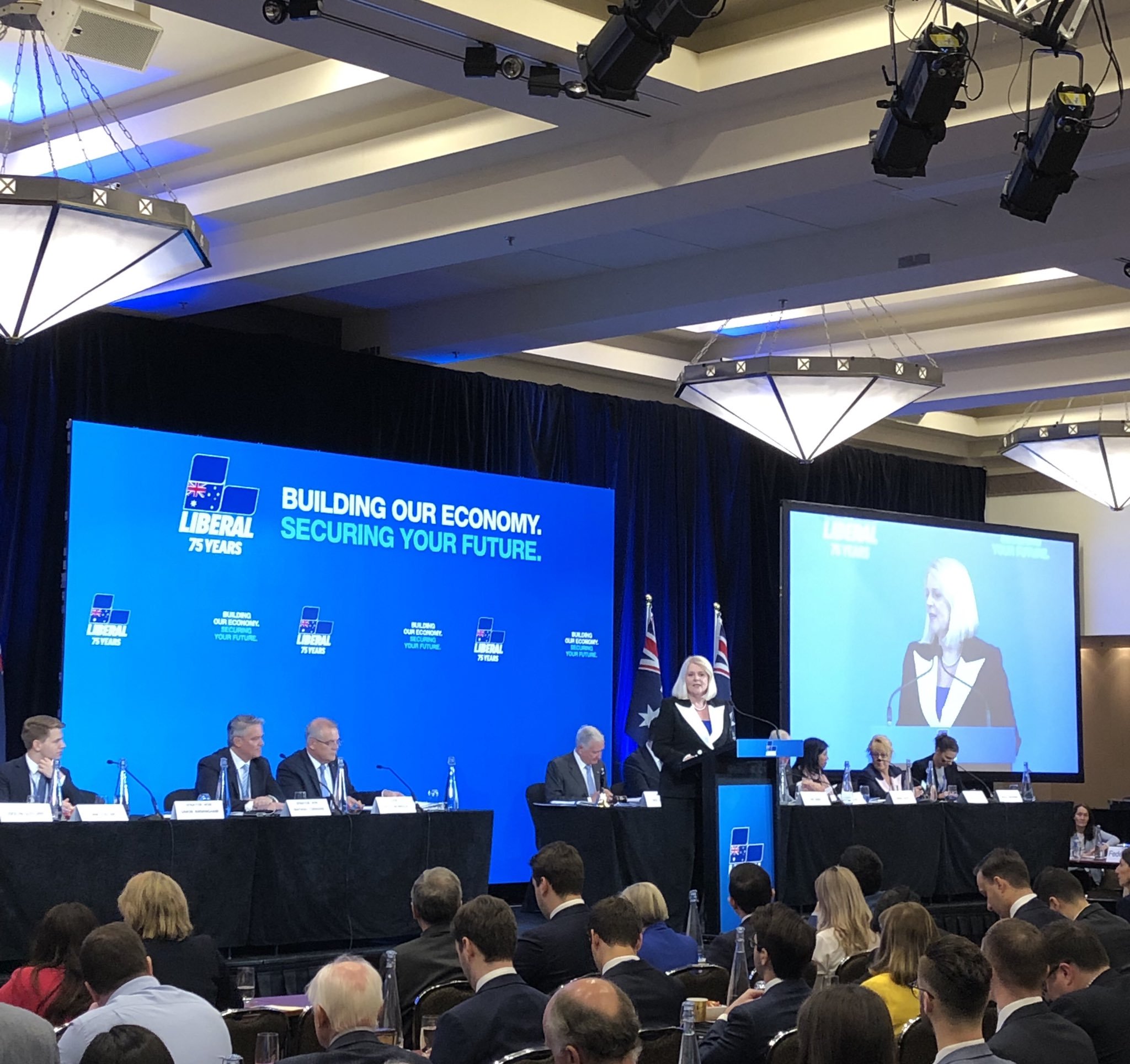 Ladies, gentlemen, colleagues and friends, it’s a special honour to be asked to speak today.

We share a unique sense of occasion as we gather this year and commemorate 75 years since our party was formed under the unifying leadership of the great Sir Robert Menzies.

It’s very fitting in this historic year that we have witnessed an unmistakable return to these fundamental values.

And once again it has been achieved by a principled and unifying leader. A leader who defied the odds to deliver genuine renewal and purpose…just as Menzies did 75 years ago when he brought together a range of voices that were the genesis of our Party.

A leader who, through his personal character, work ethic and values, won first the confidence of his colleagues…. then the respect of the Australian people…. and then the unwinnable election.

A leader who is as genuine and straight forward when he’s making a deal with Donald in the White House as he is when complementing Jarrad on his mullet in a pub in Tasmania.

Seriously folks, how good is ScoMo?

I am delighted to have the opportunity to say a few words about our Prime Minister Scott Morrison.

I know right now he’d be waving away the comparisons with Sir Robert.

That’s who he is.

In fact, did you know Scott Morrison’s very first words in the Federal Parliament, just over 10 years ago, were: “It is with humility and a deep sense of appreciation”… those were his first words.

I think that sums up our Prime Minister and why he resonates with everyday Australians.

His sense of service and his love of our nation is echoed in his humble approach to government and his incredible work ethic. Again, I’m sure he’s waving off these comments…

But I do think there’s something in the fact that his miracle election win occurred in our 75th year.

There’s a real resurgence in our Party that builds on our proud history. A modern return to our origin story.

A sense of renewal… and a new beginning.

Our forgotten people have evolved into the quiet Australians.

And let me tell you – those quiet Australians have kept a silent tally of Scott Morrison’s achievements.

Many of his achievements have had a shared quality: they’ve defied expectations.

Let me go through a couple:

The weight of opinion was that the flow of illegal boats to our shore could not be stopped. But, as Immigration and Border Protection Minister, Scott set up operation Sovereign Borders. He stopped the deaths at sea and made Australia more secure.

The weight of opinion was that the scales had tipped on fiscal restraint and our Budget simply could not be balanced in the foreseeable future. But, as Treasurer for three years he diligently set about getting the Budget back in the black…and he was called to the top job just before we reached that milestone. But make no mistake – he did the hard yards to fix our economy.

And one more thing – when Scott Morrison was called to the leadership, the weight of opinion was that his time as Prime Minister would be chaotic and short-lived. But he again defied expectations by bringing unity, stability and a sense of real purpose to the role and to our government.

That was certainly no small achievement, given the culture that had evolved in Canberra over the decade since the stability and security of the Howard Government.

And on the matter of political standards, I hope Scott will forgive me one more comparison with Sir Robert Menzies:

In his very first election campaign as the leader of our Party, Sir Robert said, and I quote:

“If there has been a degeneration in the standard of politics, it is chiefly because we have tended to move rather blindly from expedient to expedient. In the long run there can be no high politics unless all parties have a sense of direction. We need to return to politics as a clash of principles, and to get away from the notion that it is a clash only of warring personalities.”

Like our party founder, the Prime Minister knows that principles matter.

And that expediency – doing what is convenient rather than what is right – is the death of good government. He knows that…. and he lives that.

And that is why he has earnt the trust of the Australian public.

The Prime Minister has also acknowledged the great role model we all have in our second-longest serving Prime Minister John Howard. A wonderful exemplar for all of us.

And while we’re making acknowledgements, I know that Scott would also be the first to admit that so much of who he is today is due to the love, support and guidance of his family – and especially his wonderful wife Jenny.

So on behalf of the Party I take this opportunity to sincerely thank and acknowledge Jenny and the family today as well.

Our families are the ones who make the greatest sacrifice when we make the choice to serve the nation in Parliament.

And they often truly are the forgotten people.

So – thank you to all the spouses and family members of our elected representatives here today.

You remind us of what our great party is all about: creating a better future for our families…. for our children, grandchildren… and all generations of Australians to come.

Ladies and Gentleman, on the historic occasion of our 75th year, please join me in welcoming the Leader of our Party and the Prime Minister of our nation, Scott Morrison.