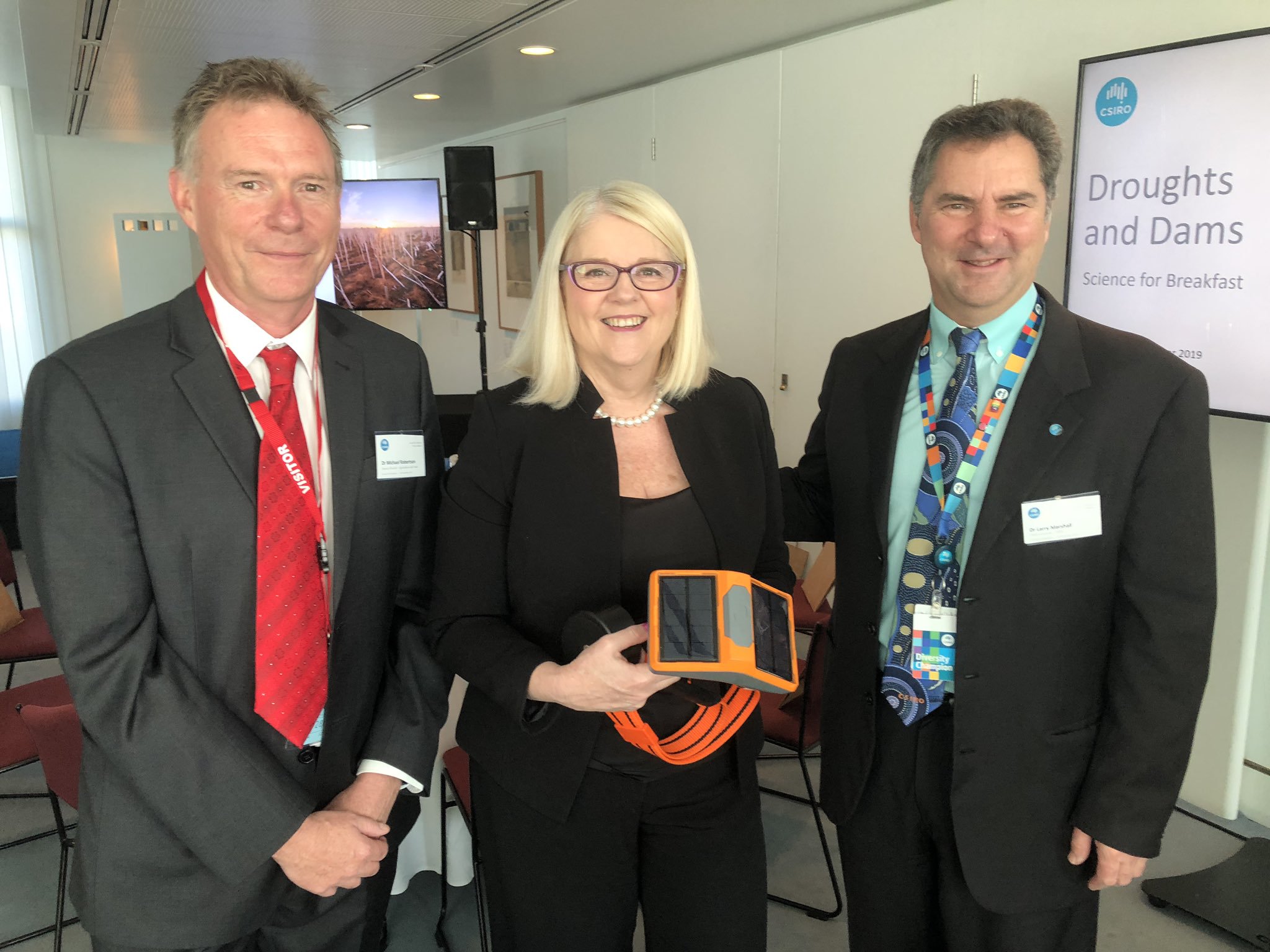 Tom Tilley: Australia’s top science leaders and bushfire experts are gathering in Canberra today to help the Morrison Government thrash out a plan to deal with longer and more severe bushfire seasons. Representatives from the CSIRO, the Academy of Science, the Bushfire and Natural Hazards CRC will share their latest research with Science Minister Karen Andrews. In the latest in a series of roundtables the Government’s holding today and all this week, it’s basically stepping up its response to the bushfires after facing heavy criticism for its early handling of the crisis and Karen Andrews joins us from our Parliament House studio. Minister, welcome back to Breakfast.

Karen Andrews: Good morning Tom, how are you?

Tom Tilley: Yeah, very well thank you. We’ve been warned for years that something like what we’ve witnessed this summer would happen. Should we have had this roundtable before the summer came?

Karen Andrews: Well I think it’s fair to say that there has been a lot of work done over many years to deal with bushfire hazards. If you even look at the signage that is on the sides of the roads and has been there for many, many years – in fact probably close to 50, 60, 70 years which actually talks about fire hazards – that work is based on some very strong scientific evidence that’s been gathered by the likes of the CSIRO that looks at a range of factors. So we’ve got the CSIRO that’s already been working on bushfires, we’ve got the CRC that’s been in place for some eight and a half years now, we’ve got many universities and other science agencies across Australia that have worked on bushfires. What’s important now, and where the roundtable today is going to be so significant, is we’re bringing all of these people together so that there is a consistent, uniformed approach to how we deal with the bushfire issues now and into the future because we know that we will face further bushfires across Australia in coming years. So, how do we adapt? How do we become more resilient? How do we look at our fire protection methods? How do we look at predictive technology so that we can help our firies be in the right place at the right time?

Tom Tilley: But why didn’t you bring these agencies together before this summer came and we faced the reality of the massive bushfire threat that you’ve been warned about for months?

Karen Andrews: Look I think that’s a very fair question. These agencies do work together but this is the first time that I have sat down with them collectively to speak about bushfires. We have a number of roundtables that have worked across various industries in the past. This one is specifically focused on bushfires and it’s going to go a long way towards I guess reassuring Australians that work has been done and will continue to be done. This will be the first of many roundtables that I will be hosting over the coming year because I’m very focused on making sure that we have some actions and strategies in place so that that we can look at what we can do to build resilience so that when we face further bushfires during the fire season next year we’re better placed than what we have been this year.

Tom Tilley: In an interview published in The Sydney Morning Herald today you said that you don’t want to spend another second talking about whether climate change is real and having an impact on the bushfires that we’re witnessing. Are you referring to some of your Coalition colleagues like Craig Kelly and George Christensen?

Karen Andrews: Well I’m quoted absolutely correctly in The Sydney Morning Herald and The Age this morning and I did say that. Because every second that we spend talking about whether or not the climate is changing is a second that we are not spending on looking at adaptation, mitigation strategies. It’s actually a comment for all parties that have been involved in this debate. It really is time for everyone to move on and to look at what we’re going to do, in this case to look at mitigating dangers associated with bushfires.

Tom Tilley: But it’s only MPs from your Party who’ve been debating that point. The Labor Party, the Greens they haven’t been debating whether climate change is real whether it’s playing a role in our current bushfires – its MPs in the Coalition.

Karen Andrews: I’m actually saying, and very clearly saying, that we need to just stop having the debates about it and just move on. And there are debates from a whole range of people.

Tom Tilley: Is it just Craig Kelly and George Christensen or are there other people wasting time on the climate debate in the Coalition Party Room?

Karen Andrews: Well quite frankly Tom you and I are talking about it now and what I’m saying is that we shouldn’t be.

Tom Tilley: Yeah but that’s only because your Coalition MPs have been having the debate that you’re saying, and many people agree, doesn’t need to be had anymore.

Tom Tilley: Alright. Let’s talk for a moment about the Royal Commission. Bernard Teague who led the Commission into Victoria’s Black Saturday fires a decade ago told us yesterday that even back then it was impossible to find a scientist who would question the reality of climate change and its impact on bushfires. Let’s take a listen to what he said.

Bernard Teague: We did deal with it as a kind of side issue because we spent a lot of time trying to work out was it necessary to go into great detail. But when we found the scientists when asked were all of one opinion and we could not get anyone who was prepared to take a contrary view and be pressed, cross-examined on it – it really became a minor issue in our of strategies.

Karen Andrews: Look, that’s actually a really good point. But what the Royal Commission would do if one was set up – and let’s be clear whilst the Prime Minister has indicated that he is prepared to look at that – we actually need to make sure that we are working with all levels of government on this bushfire issue.

So the Australian public really don’t care about whether it’s a local, state or federal government issue, they actually want to see all levels of government working together. Now, there are a number of known factors with bushfires; there have been a series of inquiries. What we have this time is probably an unprecedented summer in terms of the bushfires that we have had here. What we need to look at and I’ll talk specifically about this from a science point of view and say well, we have already gathered quite a lot of evidence. Is the modelling appropriate for the future? How do we start using our technologies?

Now, CSIRO has already developed, in conjunction with the Victorian State Government, the Spark Program. We need to look at what we can do with that program, whether we can start bringing in live data so that the firies who are out there on the frontline know where they need to put their resources; which fires do they need to start attacking first. They need to know whether a fire is about to jump a break in a particular area and put their resources into that.

So let’s actually start looking at what we’ve learnt from the current fire season that we’re in now and let’s be clear, it’s not over yet. Let’s look at what we have learnt. Let’s look at what the strategies are going to be as we face the next season and seasons beyond that. That’s the important part of this and there probably does need to be some level of inquiry into what has happened; how it’s happened and how we all work together to mitigate and build resilience.

Scott Morrison: And we are reducing emissions. Emissions today are 50 million tonnes less on average each year under our government than under the previous government. We meet our 2020 and beat them by 411 million tonnes.

Tom Tilley: Labor have said that that line is misleading, that actually the reason emissions are lower now under your Government than they were under Labor is because Labor actually drove the reduction emissions when they came into power in 2017 – sorry, 2007. They reduced emissions by 13 per cent by the time they left office in 2013. Since then, they’ve flat lined. So is the Prime Minister misleading the Australian public as Labor have accused him of or is he just taking credit for Labor’s work?

Karen Andrews: Well let’s be clear about this. We have 2020 targets that were set as part of Kyoto. We have 2030 targets that have been set up part of Paris. The Environment Department has already made it very clear that we will be meeting and in fact exceeding, I believe, our 2020 targets and we are well on track with the action that’s been put in place now to meet our 2030 targets.

Tom Tilley: Only with the carryover credits from Kyoto.

Karen Andrews: Well we can argue about that but the point that I have been making is we actually need to look at what we can do to mitigate the effects of changes to the climate. I’m not sitting here in isolation saying that. There are many people that are out there saying that as well and quite frankly, that’s what the Australian public want us to do as well.

Tom Tilley: Absolutely. That’s why I’m asking you the question should your government be doing more? Is your track record disappointing on emissions reductions?

Karen Andrews: I don’t think it’s disappointing at all on emissions…

Tom Tilley: …But they flat lined under your government. They were going down significantly under Labor.

Karen Andrews: Well let me say that when I talk to people, one of the common questions that they put to me is how can they be engaged particularly on bushfires which is the issue that we are really dealing with now. That’s what our front of mind issue is. That doesn’t mean that everything else gets ignored but it means that we are focused very much on the bushfires and people say to me everywhere I go what can we do to help. And of course there are donations and a big thank you and congratulations to everyone who has been able to put some of their own money into support the communities that have been so drastically affected. But they also asked me what they can do on a daily basis.

So one of the things that I want to talk about with my roundtable this afternoon is the role of citizen science, so how do we engage the communities? Now, one of the things that we do know is that you’re not going to have a fire if you don’t have fuel. So we need to start looking at the undergrowth; we need to look at what the strategies can be. People who are out there doing bushwalks or out in the community can actually help by just taking photographs of the undergrowth where they believe it’s excessive – send it through to the likes of CSIRO. But we need to engage this on more than an ad hoc basis.

Tom Tilley: Alright. Karen Andrews, great to speak to you and we look forward to seeing the results of your roundtable today. Thanks so much for your time.

Tom Tilley: That is the Science Minister Karen Andrews.