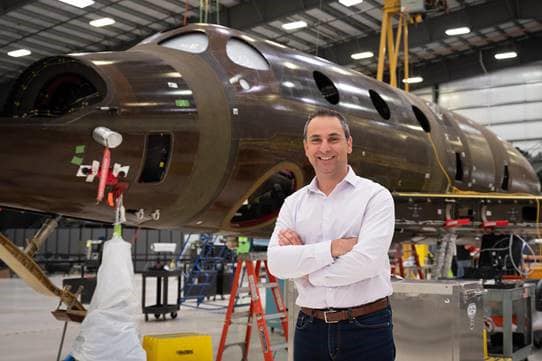 The Morrison Government is continuing to back the space industry on its mission to greater heights, with Enrico Palermo commencing today as the new Head of the Australian Space Agency.

Minister for Industry, Science and Technology Karen Andrews said Mr Palermo, the former Chief Operating Officer of Virgin Galactic, will bring global expertise to the local industry as it charts its next chapter of growth.

“Enrico’s world-class industry experience will ensure strong leadership of the Australian Space Agency as it continues to deliver on the goal we’ve set it to triple the size of the sector to $12 billion and add another 20,000 jobs by 2030,” Minister Andrews said.

“2021 is shaping up to be a big year for space as a rapidly evolving sector and an enabler of other high growth industries, like manufacturing.

“Space is one of six priorities in our Government’s $1.5 billion Modern Manufacturing Strategy, which will support Aussie manufacturers to scale up, compete internationally and create more local jobs.

“The $150 million Moon to Mars initiative will also start opening doors for businesses and researchers to build local capability and support NASA on its inspirational Moon to Mars space exploration program.

“I look forward to working with Enrico to position Australia as a major space player, one that boosts our national economy and generates thousands of new jobs in the next decade.

“I’m also confident Enrico, with his incredible work history, will help inspire the next generation of young Australians to consider a career in space, so we have the talent we need to fill those jobs being created.”

Head of the Australian Space Agency Enrico Palermo (pictured) said he is eager to continue the enormous momentum achieved by the Agency over the past two years.

“It’s great to be back home. Australia’s space industry has gone from strength to strength in the past few years and I’m eager to immerse myself in everything it has to offer to continue accelerating the industry to the next level,” Mr Palermo said.

“I look forward to working with the team to develop and deliver the next phase of our strategy – focusing on supporting local businesses to grow our space sector, putting Australia on the global map, and inspiring the nation.”

Born and raised in Perth, Mr Palermo has returned from the United States to base himself in Adelaide, which is home to the Australian Space Agency’s headquarters.

He takes over from Dr Megan Clark AC who is now the Chair of the Australian Space Agency Advisory Board.

The Coalition Government has invested more than $700 million in the Australian civil space sector, on top of investments in space activities related to defence.