The Australian Space Agency and Department of Defence have supported the Japan Aerospace Exploration Agency (JAXA) with the return of the Hayabusa2 capsule in the Woomera Prohibited Area (WPA).

Minister for Industry, Science and Technology Karen Andrews congratulated JAXA on the landmark event, which she said strengthened Australia’s position as a desired partner for future international space missions.

“I extend a huge congratulations on behalf of Australia to the entire JAXA team on the successful landing and discovery of the Hayabusa2 sample return capsule,” Minister Andrews said.

“This is an incredible accomplishment for science and space and builds on our strong working relationship with JAXA, while also highlighting Australia as a nation with the trusted expertise to support international space missions.

“The return will also enable scientists to gain insights into the origin and evolution of the solar system through studying rock, organic matter and water from the surface sample – helping us further understand our oceans and life here on Earth.”

“Science and technology collaboration is a priority for both our countries, as I recently agreed with my counterpart Minister Kishi during my visit to Tokyo in October. We agreed to drive bilateral space cooperation in areas of mutual benefit,” Minister Reynolds said.

“It has been Defence’s privilege to work closely with JAXA’s Hayabusa2 project team to support their planning and rehearsal activities for today’s successful capsule re‑entry within the WPA.

“Along with Minister Andrews, I commend the Japanese Government for JAXA’s accomplishments and look forward to future collaborative opportunities.” 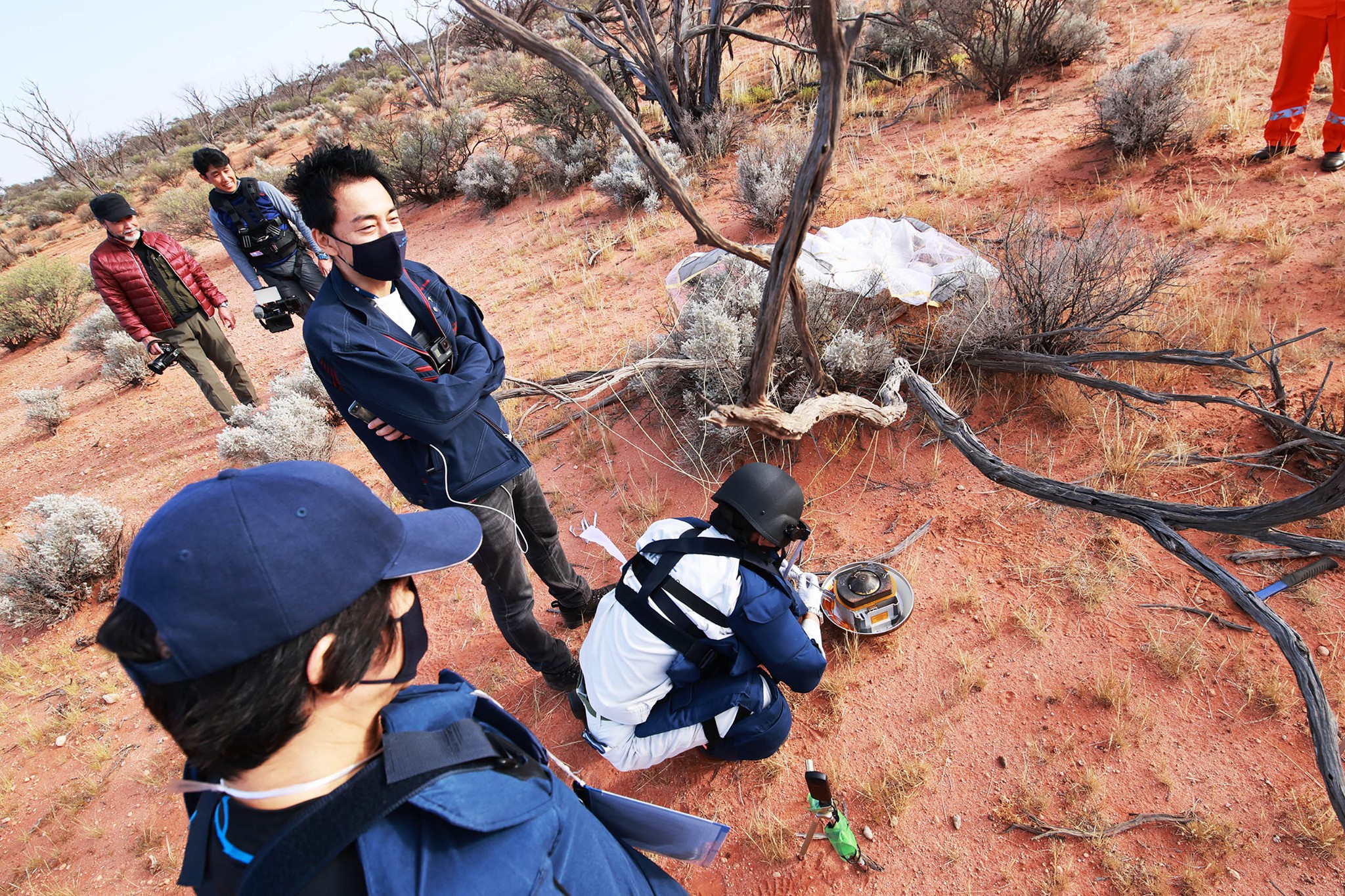 Minister for Agriculture, Drought and Emergency Management David Littleproud said the sample will give us scientific evidence of any biosecurity risks from asteroids.

“Our biosecurity officers have been working with the Agency, JAXA and NASA to ensure the Japanese and US support personnel arriving into the country comply with our biosecurity requirements,” Minister Littleproud said.

“After the sample is retrieved, JAXA will return the sample to Japan.

“The best minds on the planet will then analyse whether there are any space invaders, as far as biosecurity is concerned, on asteroids.”

“Our team helped coordinate efforts across the Commonwealth and South Australian governments to plan for the Hayabusa2 re-entry – amidst pandemic restrictions – while also implementing our regulatory role to support the safe and successful return and recovery of the sample capsule in Woomera today,” Dr Clark said.

JAXA President Dr Hiroshi Yamakawa said over the course of six years of its mission, he was very proud and honored to be able to face this important moment together with the people of Australia.

“Accomplishing the capsule re-entry, landing and recovery operation in a safe and sound manner, couldn’t have been done without the support and understanding from the Australian Government, Department of Defence, the Australian Space Agency and people in Australia,” Dr Yamakawa said.

“Under the difficult situation due to the COVID-19 epidemic, we are sincerely thankful that the JAXA Hayabusa2 recovery team was granted permission to enter the country and allowed to set up their operation base in Woomera, South Australia.

“Researchers in Japan and from all over the world will analyse the precious samples collected on the asteroid Ryugu, and we look forward to reporting the results to all the supporters in Australia.”

The Hayabusa2 mission launched on 3 December 2014 and saw the mission’s spacecraft to reach the asteroid Ryugu and extract two samples, before heading back to Earth on 13 November 2019.

For video and stills associated with Haybausa2 return, including video footage of key spokespeople and the capsule separation, re-entry and recovery, visit the following: